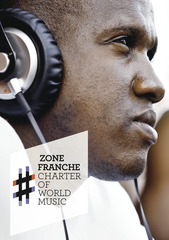 THIS CHARTER IS A BEST PRACTICE AND ETHICAL UNDERTAKING INTENDED FOR ALL, FOR ITS SIGNATORIES AND UNDER ALL CIRCUMSTANCES.

80% of people worldwide listen to regional and traditional music that is world music. Overthe last few decades world music has won favour amongst a wide external public.Heavily influenced by globalization, from rural and urban roots, it combinesthe present moment with the inheritance of the past and the promise of thefuture. This music, through time and space has become a Creole form, creating new meaningful idioms, like jazz, reggae, tango, rebetiko, hip-hop, etc. All the musical sources from which contemporary creators draw inspiration.

Whether scholarly or popular, ethnic or mixed culture, sacred or profane, of oral or written transmission, sung by professional or amateur musicians, this music lets those listening to it see themselves in the context of the world. And in this way it contributes by giving meaning to planetary citizenship and playing aneminent role in the understanding of others: in the fight against racism, xenophobia, sexism and intolerance.

The present Charter aims to unite and strengthen the industry professionals who, viatheir work, contribute to the study, creation, production, diffusion and transmission of world music.

Heterogeneous in its diversity of professions, legal structures and professional contexts,world music is however unified around the values and principles set out in the present Charter.

The signatories to this Charter undertake to respect its ethical principles andprofessional operating rules, regardless of the countries involved. They undertake to harmonise and develop the varying legislations in order to move towards more equivalent terms.

In this spirit, the present Charter advocates the free circulation of artists, the minimum condition for developing inter-cultural dialogue.

This Charter may be signed by all professionals, whether producing, diffusing or promoting world music, either on stage, via recording media, radio, audio-visual,multimedia and the Internet.

Initiated by Zone Franche in 1999, the world music network governs membership to the association and may bring in members from all professionals and artists that recognise and adopt its principles.

World music, often in essence a heritage, carries the values, cosmogonies, collective memories and principles of those involved, the interpreters of culturalentities.

Cultural diversity is the very DNA of our federation. The UNESCO conventions recognize the fundamental character of the right to participate and enjoy such diversity. The signatories of the present Charter claim allegiance to the UNESCO conventions, both in respect to Safeguarding Intangible Cultural Heritage (2003) and the Protectionand Promotion of the Diversity of Cultural Expressions (2005).

These principles, with an openness to other world cultures, shall be translated bythe signatories of the Charter into their professional and artistic activities andundertakings, the purpose of which lies beyond mere economic and commercial value.

The signatories of the present Charter contribute to highlighting world music, as a bearer of identity, of value and meaning. As vectors for openness and education in citizenship, they are the creators of social intercultural and intergenerational links. The exchanges and alterity that they produce proclaim a humanism based on the recognition of the equal value of cultural heritages.They support an exchange policy within the framework of a forward looking vision of the planet, one that respects social, united and interdependent human communities.

The signatories of the Charter undertake to welcome artists, without any discrimination by sex, origin, or religion. Their actions shall be in strict respect of the national legislations to which they belong, and more widely, to the principles embodied in the Universal Declaration of Human Rights.

They favourthe showcasing of ‘minority’ cultures at present insufficiently known to the public.

They support artistic creation, the renewal of forms and languages, by encouraging artists to create new works.

They are similarly attentive to the emergence of young artists.

Live music in particular, favours links between diverse linguistic and cultural areas. In this respect it is a major preoccupation of the signatories of the Charter.

The signatories shall carry out their actions in the full respect of and the promotionof intellectual property, whether individual or collective.

Circulation of artists
Migration and circulation are fundamental elements of globalization and it is appropriate to promote its positive effects, in particular through cultural exchanges.

The signatories of the Charter are working towards world citizenship.

Artists are ambassadors of this citizenship, and as such, barriers to their mobility must be removed.

The signatories of the Charter particularly desire further development of existing texts, particularly those which are restrictive and discriminatory, and in favour of a greater freedom of movement and the installation of artists in the country or countries of their choice.

Theyshall focus their expertise and advocacy on professional bodies such as the Artists Visa Committee, set up in 2009, and run by Zone Franche.

Conscious of world economic imbalances, signatories of the Charter are particularly attentive both to artists and their producers, nationals from low income countries. They act in order to produce a stabilizing of fair exchanges, particularly in relation to North-South cooperation.

The signatories of the Charter consider the Francophonie as a space for the cooperation of civil society, an indispensable complement to cultural diplomacy.

French is a favoured language in cultural,economic and professional exchanges, not a language for artistic and particularly musical expression. Today, the Francophonie is inseparable from an extraordinary linguistic and artistic diversity, and French stake holders recognise that they are not owners but joint tenants of the Francophonie.

The free circulation of individuals is a necessary condition for the cohesion of this international cultural space.

As such, the signatories shall work to develop further areas and opportunities for artistic and professional encounters.